Yvonne Strahovski (born Yvonne Strzechowski July 30, 1982) is an Australian actress. Born in Australia to Polish immigrant parents, Strahovski speaks Polish and English. Strahovski was born in Campbelltown, a suburb of Sydney. Her parents had emigrated from Warsaw, Poland. She adopted the more phonetic spelling of Strahovski as her stage name at Chuck producer Josh Schwartz’s behest for the sake of easier pronunciation. Strahovski moved to Los Angeles in 2007, although she has returned to Australia to work. After her acting success, her parents moved to the USA to be near her.
Strahovski started acting when she played Viola in a school production of Twelfth Night. She spent her high school years attending Santa Sabina College, Strathfield. She graduated from University of Western Sydney’s Theatre Nepean in 2003. After graduating from the University of Western Sydney she acted in three Australian television shows. She sent in her audition tape for the show Chuck while in the United States auditioning for NBC’s 2007 series Bionic Woman, which ended up going to Michelle Ryan. She sent in an audition tape while waiting to hear from two other jobs. She was contacted by the producers of Chuck the next day to come in to “run lines” with Zachary Levi. The producers called her back a week later letting her know she had been cast as Sarah Walker. Six months later, she moved to the United States. Her film career includes both Australian and American movies.
Strahovski also appears in Mass Effect Galaxy and Mass Effect 2 as the voice of Miranda Lawson. Strahovski also had her face scanned and animated so she could portray Miranda Lawson in Mass Effect 2. Executive Producer of the series Casey Hudson has indirectly confirmed her return for Mass Effect 3, stating “every main character will be in there somewhere” though the size of her role has not been revealed. Strahovski voices Aya Brea in the English version of the Parasite Eve spinoff, The 3rd Birthday, which was released on March 2011 for the PlayStation Portable. She also appeared in a CollegeHumor sketch in April 2011, parodying the music styles of Katy Perry, Ke$ha, and Lady Gaga.
In 2010, Strahovski received the Teen Choice Award for Choice Action TV Actress for Chuck. -Wikipedia 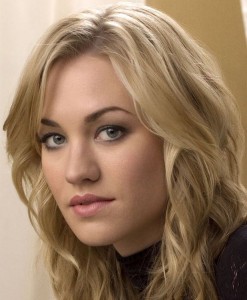